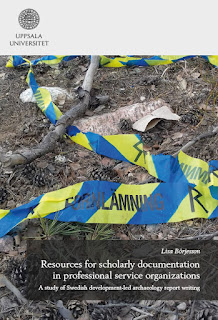 
This information studies dissertation deals with the problem that results from research outside academia risk to receive little or no attention if communicated through reports, instead of in mainstream academic genres like research journal articles. The case in focus is Swedish development-led (DL) archaeology, i.e. state regulated archaeology preceding land development. Swedish DL archaeology is organized as a semi-regulated market. The organizations competing on the market are professional service organizations selling research services to land developers. Regional government departments, county administrative boards, function as intermediaries setting up procurement-like processes. In previous research on archaeological documentation, the problem with non-use of reports has been described as depending on cultural issues of access, possible to solve if individuals make efforts to communicate and use extra-academic results. This dissertation offers an alternative definition of the problem, highlighting a different set of solutions. The aim is to further the understanding of how the distribution of research duties to professional service organizations affects the scholarly documentation in Swedish archaeology. The aim is met through identification, operationalization and analysis of resources available to report writing DL archaeology practitioners, and an analysis of how practitioners draw on these resources. The results further the understanding of how reports are shaped within the DL archaeology institution. In view of these results, efforts to solve issues of access should target the organization of research in the archaeology discipline, and specifically how scholarly documentation is governed on the archaeology market. The dissertation draws on science and technology studies, practice theory, and document theory for the design of the study of documentation resources and contexts in extra-academic research. A mixed methods approach is applied to capture regulative, institutional, and infrastructural resources, and practitioners’ use thereof. Dissertation papers I-III contain analyses of concrete instantiations of the resources: information policy, documentation ideals, and information source use. The fourth paper presents an analysis of how practitioners draw on these resources in their everyday report writing. The dissertation concerns archaeology specifically, but serves as grounds to inquire into the premises for scholarly documentation in other areas of extra-academic research and knowledge-making as well.
Upplagd av Isto kl. 05:01 4 kommentarer:

Seminar on the results of the ARKDIS project

Seminar with short presentations of the results of the

and general discussion on archaeology and archaeological information in the contemporary society.

The seminar is organised together with ARKDIS project, Department of ALM and the KOM research node of the Faculty of Arts, Uppsala University.

Isto discusses in a recently published article the role of naming and anonymity in archaeological knowledge production in the article Archaeology of no names? The social productivity of anonymity in the archaeological information process published in the journal ephemera. The full text of the article is openly available at the journal website att http://www.ephemerajournal.org.

Full citation: Huvila, I. Archaeology of no names? The social productivity of anonymity in the archaeological information process. ephemera, 2017, 17(2), 351-376.

and abstract of the article:

The portrait gallery of archaeology presents a conspicuous mix of discoveries of the great characters of the past and an everyday labour of faceless individuals of the past and present in the service of archaeology and archaeological knowledge. The aim of this text is to discuss the premises and conditions of why and how the anonymisation happens in the archaeological information process and the forms of social productivity (or consequences) of the anonymous moves. Anonymity becomes a boundary object that is authored in the course of the switchings from netdom to another to emerge as a particular type of social relation and a constituent of a social imaginary of being archaeological.

Dr. Johanna Enqvist (University of Helsinki) presents her PhD thesis work titled "Protected memories - Language, Concepts and Ideology of Archaeological Heritage Governance” (University of Helsinki, 2016) at the Research Seminar at the Department of ALM on Tuesday April 25, 2017 at 2-4 pm in room 3/0015, English Park Campus. The seminar language is English.
The abstract of Johanna's PhD thesis can be found below:
"The dissertation explores the key concepts of archaeological heritage management in Finland: their aspects, definitions and meanings, the history of the concepts and especially the contemporary, official discourse surrounding them  – the ways in which people represent, talk and write about  archaeological heritage  [arkeologinen perintö] and  ancient remains  [muinaisjäännös]. The social context of the study was focused on the Finnish archaeologists who worked in the intersecting fields of heritage management and academic archaeology. The texts, produced by the archaeologists, were analysed by means of critical discourse analysis; the findings of the analysis were compared to one of the most important contributions in the development of critical heritage studies: Laurajane Smith's (2005) theory of the authorized heritage discourse (AHD).
The study dissects the ideologies, identities and interaction which are constructed and maintained by the Finnish AHD. Consistent with Smith s arguments, the Finnish AHD appears as an ideological construction that is dominated by heritage officials and experts, and thus excludes other members of society from taking part in the processes that define heritage. The world view of the AHD represents reality as being divided into indisputable and naturalized conceptual categories, as well as into the quantitative results of measurements and numbers in the pursuit of scientific rigour. Archaeological heritage is defined and evaluated by the experts as material objects whose physical integrity, interpretation and representation of which archaeologists control.
The AHD is maintained in the network of official texts which concatenate and refer to each other. The vital intertextual element of these texts is derived from the Finnish Antiquities Act, prepared in the 1950s, which carries the connotations of nationalism and a juridical discourse. The social significance of heritage management, protection and research of archaeological heritage is thus reduced to obeying the law in the AHD.
The results and the conclusions of the study, concerning the historical contingency, causes, effects and action of the official heritage discourse, are vital in order to promote the more inclusive and participatory heritage practices in Finland in the future,  the democratised heritage discourse , which consists in the emancipatory interest of the research."
The thesis is written in Finnish and the full text can be found at https://helda.helsinki.fi/handle/10138/162811 More information about Dr. Enqvist can be found at https://tuhat.helsinki.fi/portal/sv/person/joenqvis
Upplagd av Isto kl. 22:19 3 kommentarer:

Encounters of amateurs and professionals with tangible cultural heritage

The two speakers in this seminar introduce different perspectives on engagements with tangible cultural heritage outside the realm of custodial heritage organizations and academic scholarship, and explore the diversity of actors, practices, and implications of such engagements for the poetics and ethics of institutional heritage work. Suzie Thomas explores the engagement of metal detectorists with difficult and dark heritage of the recent past in northern Europe, and questions the response of official archaeology towards this activity. Costis Dallas looks into the curation and affiliative identity practices of heritage professionals, source communities and amateurs on social network sites in Greece, and probes their institutional implications. Based on their research, speakers will debate questions of identity work, social curation, place and objectual agency, participation and creativity, contestation and power, and institutional logic emerging from these onsite and online explorations of heritage encounters outside the fold of custodial heritage practice.
Dr Suzie Thomas is University Lecturer in Museology at the University of Helsinki, Finland. She obtained her PhD in Heritage Studies from Newcastle University, UK, in 2009. Since September 2015 she has been on research leave to work on the Lapland's Dark Heritage project (http://blogs.helsinki.fi/lapland-dark-heritage), funded by the Academy of Finland. She is co-editor of the Journal of Community Archaeology and Heritage.
Prof. Costis Dallas is Associate Professor in the Faculty of Information, University of Toronto, and Research Fellow of the Digital Curation Unit, "Athena" Research Centre, Greece. His current research is on digital curation of thing cultures "in the wild", on scholarly practices in the pervasive digital environment, and on identity and memory work in social network site interactions around cultural heritage.
The seminar is organised in collaboration with Arcaheological Information in the Digital Society research project (arkdis-project.blogspot.se) and COST Action CA15201 Archeological practices and knowledge work in the digital environment (www.arkwork.eu) and Research Node KOM (Knowledge Organisation and Power).
Upplagd av Isto kl. 01:00 1 kommentar: