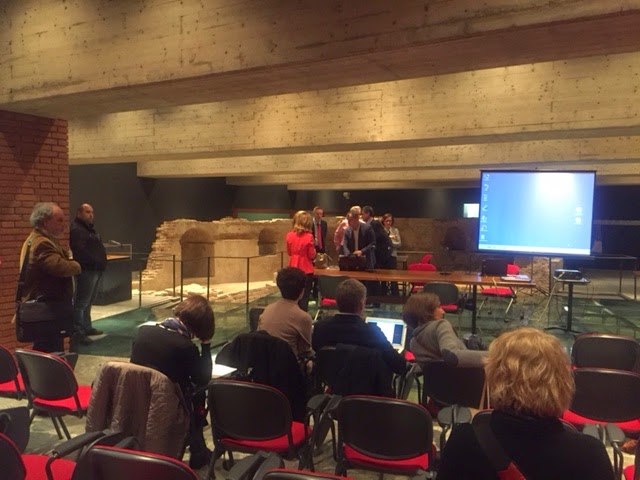 Isto was participating in the annual Organisational learning, knowledge and capabilities (OLKC) 2015 conference hosted by the Università Cattolica del Sacro Cuore in Milan, and presented a paper based on the material collected as a part of the ARKDIS project titled AUTHORSHIP, PRACTICAL AUTHORSHIP AND DOCUMENTARY BOUNDARY OBJECTS IN ARCHAEOLOGICAL INFORMATION WORK that discusses the  making of the social landscape of archaeological work and how different types of authored artefacts like reports and archaeological data are a part of that process of making. Slides and a pre-version of the paper can be found at http://istohuvila.se/node/436

An interesting curiosity was that a part of the sessions of the conference were held in an underground lecture theatre that happened to incorporate elements of a earlier structures found on the site. I am just waiting for an archaeology conference to be organised in the same room.
Upplagd av Isto kl. 09:08 4 kommentarer:

Isto, Nicolò and Daniel from the ARKDIS project are participating in the Computer Applications and Quantitattive Methods (CAA) 2015 conference in Siena, Italy. There is a whole lot of interesting things going on from archaeological information management to 3D and predictive modelling (to mention a few themes) at the conference. You can find more information about the programme and presentations on the web at the caaconference.org or e.g. on Twitter by searching for hashtags #caa2015 and #caasiena.