What is going on in digital archaeology?

Isto and Daniel are at the moment at the annual Computer Applications and Quantitative Methods conference (CAA 2014) in Paris. The conference gathered this time around 400 archaeologists and archaeology interested researchers and practitioners from other disciplines to discuss on-going practical work and some glimpses of the state-of-the-art of digital, computational and informational aspects of archaeology. In addition to the long-time favourite topics of the conference, GIS and 3D, this year there was a rather notable presence of the papers relating to the historical and theoretical issues of archaeological computing (commemorating the work of late Jean-Claude Gardin) and another track on agent-based modelling. Open and linked data were also present both in the titles and the contents of many papers.

In contrast to the considerable investments in creating technologies, infrastructures and standards for digitalisation, preservation and dissemination of archaeological heritage, there is still only little indepth research on the consequences, opportunities and implications of digitalisation to archaeological work, the emergence of archaeological knowledge and how it is used by diverse stakeholder groups from ordinary citizens to researchers, museum professionals, landowners and property developers. Apart from the excavating or prospecting archaeologist with a personal experience of a particular site, the principal source of information for other stakeholders is the 'archaeological archive'. There are on-going national and international (e.g. ARCHES-project and the archives workgroup of European Archaeologiae Consilium) initiatives to standardise archiving practices in archaeology and a relative long albeit somewhat slender line of theoretical and practice oriented research on the topic (e.g., Merriman and Swain, 1999; Swain, 2006; Brown, 2011; Lucas, 2010). What is lacking, but would support the practical work and to contextualise earlier theoretical openings, is a broader empirical understanding of the everyday premises of how archaeological archives are managed in practice and how archiving is and is not related to the development of archaeological information systems, databases and archaeological information management practices.

The presentation reports of a Swedish interview study that explicates and maps the work practices and perspectives of the primary stakeholders of archaeological archives. The analysis of the interview records show that there are multiple technical, legislative, conceptual and structural problems that complicate the building, management and use of archaeological archives. Privatisation of archaeological fieldwork, the diversity of involved actors, and often diverging practical and statutory requiments and responsibilities of preserving different types of materials. Further, the digitisation and growth of the amount documentation material has brought demands for effective means of capturing and preserving new forms of data, but also a need to reconsider the concepts of “archaeological archive” and ”archaeological data”, and their functions in archaeology and the society as a whole. The analysis shows that the different actors appropriate (as e.g., in Ramiller and Chiasson, 2008; Twidale et al., 2008) rather than share or even translate the ideas of archaeological information process, archaeological data and archives from a widely different premises to fit their urgent priorities. The findings have several both theoretical and practical implication to the mapping of the digitalising archaeological information processes from the perspectives of different stakeholder groups, standardisation and documentation of current practices and clearer definition of responsibilities, explicit allocation of budgets for archival tasks and the explicit acknowledgement of the diversity of how archaeological information is produced, archived and used.
Upplagd av Isto kl. 03:45 Inga kommentarer: 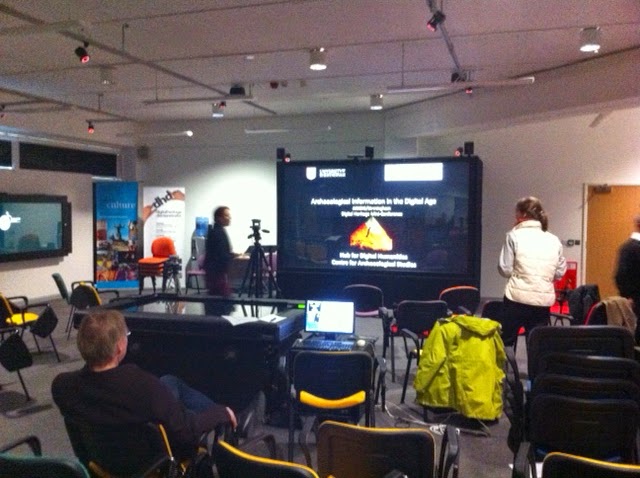 The last visit of the ARKDIS tour in the UK was hosted at Digital Humanities Hub at the University of Birmingham by Vince Gaffney and Henry Chapman. We spent the day by learning of each others' work at a mini-conference where both ARKDIS and Birmingham researchers presented their recent and on-going work. We had several common interests from the methodological issues of GIS and landscape archaeology to 3D modelling and management of archaeological data. The presentations also showed clearly that the state-of-the-art of digital methods in archaeology is about combining solid theory and solid research questions.
Upplagd av Isto kl. 03:31 Inga kommentarer:

The ARKDIS tour has continued from Manchester to York. In Manchester, at the Institute for Cultural Practices, University of Manchester we were hosted by Dr. Kostas Arvanitis together with his colleagues. We had an opportunity to hear about each others research at a morning seminar. Kostas Arvanitis told about his highly interesting and theoretically ambitious work on museums and everyday life in the context of several different projects. Professor Stuart Campbell gave an overview of virtual worlds of archaeology (an excellent concept for describing the emerging virtual/digital context of archaeological research) and data archiving efforts in a series of field projects in the Middle East.

Campbell Price gave a brief but very informative overview of blogging at the Manchester Museum in his role as a curator for Egypt and the Sudan. Doctoral student Chiara Zuanni described her very promising study of visitors' and staff views of the permanent exhibition of archaeology at the Manchester Museum. Already the early results demonstrated clearly a number of conceptual and perceptual differences. Finally, Professor Sian Jones gave a talk of her work on ACCORD project on promoting community engagement in heritage using hands-on 3D modelling as a way of involving the public in interpreting artefacts.

In York, ARDKIS met Gareth Beale from the Centre for Digital Heritage (a collaborative initiative between York, Uppsala, Aarhus and Leiden described already earlier in this blog), and Holly Wright, professor Julian Richards and Katie Green from the Archaeology Data Service who gave us an informative overview of the activities of the institution and the state-of-the-art of archaeological data archiving in the UK.